Riverbank Treasures is located on the first floor of the “old bank building” in downtown Lyons, Michigan. Thanks to the Lyons-Muir Historical Society, (one of our wonderful vendors here) we now know it was originally built in 1876 by John R. Dougherty as the J.R. Dougherty Bank.

Caption on right photo below:
“John R. Dougherty
Was a partner with Frank Gleason in a general store. In 1868, he bought 240 acres of land south of the village. In 1876, he opened the J.R. Dougherty Bank in Lyons, and later sold his interest to S.W. Webber and Company. After his death his widow made her home in Lyons. Mr. Dougherty left the bank building to the township with all earnings from the building to aid the poor.” 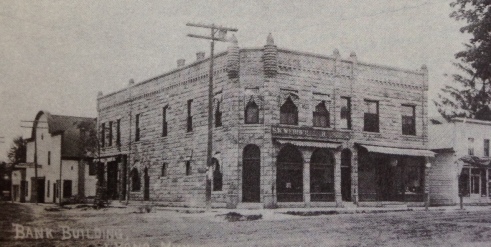 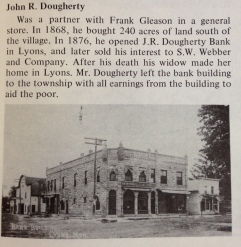 Captions on photo below:

“(Tot) Kelley, Harry Gardner, and an unknown gentleman in front of the Ruel Upton Bank.

Victor Upton
Worked in Rochester at a bank owned by Webber, Hale and Company. Came to Lyons to work in a bank owned by S.W. Webber, Sr. and Jr. In 1913, Mr. Upton and Mr. Ruel bought the Webber interest. In 1916, he organized the Savings Bank of Pewamo and was a stockholder in the Newaygo Bank and Lyons Handle and Furniture Company.”